SEERS AND SAGES: AN INTERVIEW WITH MARY K. GREER

Welcome to The Divination Nation blog!

We are Pleasant Gehman and Crystal Ravenwolf, a duo of divination divas, “spiritual sisters from another mister”. We’re life-long Tarotistas and obsessed with all things esoteric, occult and paranormal. We’ve created this blog to share our knowledge and to connect with the vibrant worldwide metaphysical community.

We are extremely honored to feature Mary K. Greer as the first interview subject in our new  “Seers And Sages” series.

To say that Mary K. Geer is respected in the Tarot world almost is an understatement. The word revered comes to mind, as do venerated, celebrated and honored.  In fact, let’s just say that hands down, she’s The High Priestess of Tarot.

In an illustrious career that’s spanned nearly fifty years, she’s devoted her life to the Tarot, not only as an expert card reader but also in her extensive scholarly work. She’s literally spent decades studying and researching this ancient art.  She’s lived and worked in several countries, and currently resides in Northern California, though she shares her vast knowledge by teaching and lecturing all over the globe.  Her work is illuminating as well as revolutionary- she’s the founder of Tools And Rites Of Transformation, aka T.A.R.O.T., and also teaches many courses on line. If you are lucky enough to be attending a Tarot symposium or festival where she’s teaching, run-don’t even think of walking- to one of her workshops or lectures.  We took her workshop “The Fool’s Progress” at  TarotCon in Denver this past June, and were nothing short of blown away.

Mary has an M.A. in English Literature and is the author of nine hugely popular books on various aspects of Tarot. Her 21 Ways to Read a Tarot Card (Llewellyn, 2008) won the COVR award for Best Divination Book. Her latest book is Who Are You in the Tarot? Published by Red Wheel/Weiser…but trust us, they’re all great and packed full of information, as is her blog.


Since most of the interviews we’ve read with Mary concentrated on the scholarly facets of her work with Tarot, we thought it would be interesting to find out more about the  more personal aspects of her extraordinary life...enjoy!

When did you first start getting into Tarot?
It was Christmas, 1967 and I was a junior in college. My best friend got Eden Gray’s Tarot Revealed. The pictures immediately “spoke” to me. But my friend got only the book without the deck. Asking where I could find such a deck, I borrowed a car, and set out on what I consider my first “spiritual quest.” I ended up at a metaphysical bookstore in Tampa, Florida and bought the University Press edition of the Rider-Waite-Smith (RWS) deck.

The minute I saw the pictures in the book I was drawn to the idea that you could reveal something about a person based on these story-telling images. It fit right in with my college studies as an English major in symbolism and archetypal criticism and with my recent introduction to Joseph Campbell’s The Hero’s Journey. It also went along with the kinds of exercises we were doing in acting classes. It was like all my interests came together in this one thing.

Did you know right off the bat that it was going to be your life’s work?
Within that first year I decided that I would someday teach Tarot in college as an academic subject and that I would eventually write a book about it. I set about finding out anything I could about Tarot.

How did you learn at first- was it passed down to you, did you study on your own, take classes, or were you mentored by someone?
When I began I couldn’t find anyone who knew anything about Tarot, so it was mostly my reading books and reading the cards for others on the fly. Making associations between images and a person’s life seemed to come naturally to me. I searched out every book I could find on Tarot and struggled to understand the more esoteric concepts on my own, taking up the additional studies of astrology, magic, Kabbalah and even Spiritualism.

I moved to London where I met several people who furthered my interests including a young man who had known Fritz Perls and started me Gestalt Therapy techniques with Tarot and a woman who was studying with Paul Foster Case’s Builders of the Adytum, which I subsequently subscribed to. By 1974 I offered my first class as a non-credit course at the University of Central Florida, Orlando where I worked as a typesetter and graphic designer and got my M.A. in English. For my second Tarot course 60 people showed up! It was around this time that I met someone who had written on Tarot and was very much into Jungian psychology—helping me expand my awareness of how these fit together. But it wasn’t until after I moved to San Francisco in early 1976 and had been teaching Tarot for several years in a college that I took my first Tarot classes from others: Hillary Anderson, Angeles Arrien, Jason Lotterhand and Diane di Prima among the first. I’ve been regularly speaking at Tarot symposiums in San Francisco and elsewhere since 1979.

Please share an anecdote about your early days about any of your earliest readings, or first professional gigs?
While still in college, I quickly learned that reading for people I didn’t know (friends of friends) and often without even knowing the question, got the most impressive and accurate results. Potential boy friends became very uncomfortable at my ability to “see” into their deepest secrets that I would blithely reel off with little understanding that they hoped to keep these parts of themselves well hidden.

What is your creative process for the books you’ve written?
Each book has presented me with a unique challenge and requires a unique approach. I no longer think I know the “secret” to how to go about it, like I thought I did after writing my first few books. Mainly it is long hours of writing and rewriting and, where required, doing far too much research and practice before I feel competent or ready to share what I know. All the exercises are tested thoroughly in my classes. A book’s subject matter largely dictates what and how the book will be presented, along with synchronicities that arise. I was in Paris researching Women of the Golden Dawn when I noticed a postcard of a painting on an outdoor rack. It was Walter Crane’s Masque of the Four Seasons. When I learned that Crane probably knew several of the people I was writing about, the painting, representing the four women, became the cover. I also structured the book around the “four seasons” of his or her lives, each section introduced by a verse from a seasonal “folksong” which I later found out was really written by the mother of someone who became a friend. A “masque of the seasons” is a kind of ritual and, since I was writing about the magical lives of my subjects, I decided to place the entire book within a ritual context with chants of invocation and release at the beginning and end of the work. The writing-a-book process itself leads me down strange roads that I can never predict!

What sort of process- intuitive and/or scholarly- do you use for your own work?
I’m not sure how this is different from the books I write. Certainly I have studies that will probably never come out in a book. I started my blog to present my more scholarly work, which publishers are loathe to publish. Or my studies form the basis of workshops and advanced teachings. As I mentioned before, I over-research and over-prepare. What I love most are the practical ideas and insights that come in the midst of workshops – perhaps when someone asks a question about how to do something and I make up an exercise on the spot that will demonstrate the process. Sometimes the exercise fizzles out and sometimes it’s a great success. Most of my successful teaching exercises have ended up in my books.

How did you start integrating art, psychology, history…and all the things that make your approach unique- into your work?  Did it evolve organically, or did you make a concerted effort?
Wanting to know everything possible about Tarot involves all of these things and more, including mathematics and probability theory, science, literature, philosophy—pretty much everything found in a humanistically inclined Liberal Arts education. What can I say? I’m a perpetual student! For instance, besides teaching in a college for eleven years, I’ve been in a Jungian-based book-group, meeting several times a month for over twenty years.

You’ve travelled all over the world- lived, taught and spoken in several countries…  do you notice any cultural differences regarding Tarot in the places you’ve visited?
I really can’t speak from a global perspective. I haven’t yet taught in Asia and my teachings in Egypt were to westerners. France and southern Europe tends to use more Marseille-style decks with their own esoteric underpinnings (non-Golden Dawn). I felt that the Tarot readers I met in Brazil felt far freer in using Tarot and other cartomantic systems as only one part of their healing work. They include everything from crystal healings to Santeria practices in a session. In the USA, I perceive a sometimes subtle, sometimes overt, divide between those who work more psychologically and interpersonally and those who are more descriptive/predictive (focusing only on interpreting what the cards say in response to a question). But I’m really oversimplifying a wide range of reading practices by my comment. While the internet has opened up an awareness of creative and innovative approaches to Tarot it has also made clear that there are Tarot “fundamentalists” who believe their approach is the only right one, and they aren’t tied to one culture.

What places would you recommend for “Tarot Tourism”?
Northern Italy: Milan, Ferrara, Bologna, Siena, il Guardino dei Tarocchi and more. Egypt is worthwhile if just to convince you that, while the great archetypes are well portrayed, it is not the source of Tarot. Additionally, attending one or more of the major Tarot conferences can be a real eye-opener—I definitely recommend doing this. You’ll make friends for life!

Who do you admire,  (living or passed, established or newer on the scene) in the Tarot universe?
I love everything about Tarot: the books, decks, personalities, and its connections to all forms of human culture. The list would go on and on and on, so I’ll just mention A.E. Waite and Pamela Colman Smith, as, without them, I may never have developed my love for a Tarot that speaks directly to me.

Please let us know about any upcoming projects you’re working on…
I prefer to not talk about my projects until they are produced, although I’ll say that I’ve expanded my interest in Tarot to include all forms of cartomancy and a great interest in the lives of cartomancers.

What is most important piece of advice you have for card readers, or aspiring readers?
Rules are made to be broken! At the same time you might want to take a look at what a rule is trying to express and determine if is it worthwhile in some form or another. Let go of rules that are unnecessarily limiting. When you look at a card and can’t think what it means: Simply describe the card. More often than not, that will get your intuition flowing. Intuition is not always right. It is different than psychic insights and it is worth cultivating those differences. While your first thought is worth noting, it’s not always worth saying. Continue to develop your reading skills, which include everything from symbology to interpersonal communications. 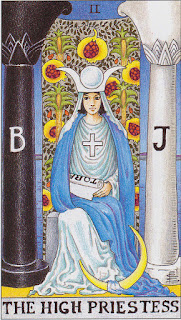 We wanna connect with you!