A GUIDE TO GHOSTS, SPIRITS, DEMONS,SHADOW PEOPLE... AND OTHER MANIFESTATIONS OF THE PARANORMAL


Welcome to The Divination Nation blog!
We are Pleasant Gehman and Crystal Ravenwolf, a duo of divination divas, “spiritual sisters from another mister”. We’re life-long Tarotistas, obsessed with all things esoteric and paranormal. We’ve created this blog to share our knowledge and to connect with the vibrant worldwide metaphysical community. Aside from Tarot, we practice many other disciplines, including Reiki, pendulum divining, dousing, crystal work, mediumship, house cleansings, and more. We read for clients, write, lecture and teach together as well as working solo. For years, we’ve worked as professional belly dancers, and since 2009, we’ve been doing paranormal investigations as a team, exploring public and private sites that are r haunted.  Currently, we’re working on our book, “ Walking The Tarot Path”.
We’d love for this blog to be relevant for metaphysically-inclined peeps at every stage of development from e beginners to professionals, our posts will range from basic concepts and info that many of you are undoubtedly familiar with, to interviews, how-to’s and reviews on events and products.
We hope this blog is as fun for you to read as it is for us to write…Enjoy!

You never know what you might encounter on a paranormal investigation…or in your own house!
Many people are skeptics, but for every person who dismisses the paranormal as bunk, there’s another whose just had their first supernatural experience-and probably many more who’ve had brushes with the unexplained but don’t discuss it, fearing that their friends and family will think they’re crazy.

In fact, we get emails and voicemail messages all the time from people who’ve witnessed something paranormal or anomalous. They describe their experiences and ask what possible explanation there could be as to what they witnessed or why the incident occurred.  One woman saw an Indian Chief in full regalia…cutting into the line ahead of her at a convenience store. She said that the moment they locked eyes, he vanished completely. She left the store, went into her car and hyperventilated for a while before emailing us. Another person recently asked Pleasant why there was a transparent mountain lion living in her yard.  We constantly are asked to do house cleansings for reasons ranging from “I feel bad energy” to “I hear weird bells in my apartment” to “My child refuses to sleep in her room because she’s scared- and she’s eighteen years old!”

So here is a quick reference guide to some commonly experienced manifestations of the paranormal. Be aware that many of these manifestations can occur in tandem with each other.

Spirits: Basically a spirit is a sentient, self-aware being which is lacking a physical body. A spirit could be a deceased human or non-human, such as  an angel or demon.

Ancestral Spirits: An ancient spirit that follows certain familial groups wherever they go, often throughout generations.

Anomalous Lights: Often called “spook lights”, “ghost lights”  “fairy lights “or “will o’ the wisp”, anomalous lights can take many shapes and forms. Widely seen for centuries, there are many explanations for them, ranging from UFO or ghostly encounters to ignited swamp gas to foxfire, which is a bioluminescent light that discharges from rotting wood, usually seen in forests. However, these lights don’t always occur in the outdoors.  In 2010 and 2011 when we were leading paranormal investigations on board the extremely haunted RMS Queen Mary, many guests in the ship’s cabins mentioned they’d seen odd lights in their rooms which didn’t seem to be coming from any specific source, such as a porthole or electrical device or outlet.

Apparitions: A spirit or ghost that manifests itself in either full or partial human form. Sometimes an apparition can appear human, looking like a three-dimensional, living person; other times, it wills emerge-and stay- transparent or smoky. Once in a while, an apparition can be horrific, appearing horribly scarred, or as a disembodied head with glowing eyes or limbless torso.

Demons: A hostile or resentful entity, generally believed to be of non-human origin. Some call them fallen angels…others don’t care what they’re called, they just want them to go away!

Ectoplasm: Does spirits exude a viscous substance, or issuing from a  (human) medium in a trance, while the spirits being channeled gain "physical" form.   It can appear in various ways, from thin, wispy strands to gelatinous and paste-like. In the early 20th century, when Spiritualism was all the rage and séances were common, many so-called “mediums” were fraudulent, using sleight of hand to produce  “ectoplasm” fashioned from surgical gauze, cheesecloth, animal organs, and even shredded newspaper.  This lead many to be skeptical of ectoplasm, and, like many other paranormal manifestations, there is not yet a scientific explanation for this phenomena.

Ghosts:  Many people use the word “ghost” and “spirit” interchangeably. While it’s not wrong to do this, if you want to get specific, ghosts are usually the disembodied energy of a deceased human. A ghost is a spirit that either hasn’t yet crossed over to the other side, or one that has either come back to visit, or decided to hang around the earthly plane.

Orbs: Appearing almost exclusively on still or video film, orbs are almost never seen by the naked eye, making them different those anomalous lights. The phenomena of orbs are a point of debate in the paranormal community, as well as outside it. While many believe that orbs are proof of spirit manifestation, there are too many logical or scientific explanations for these occurrences, such as dust or condensation on a camera lens, a lens flare, or a reflection from a natural source.

Poltergeists: The German term poltergeist translates to “noisy ghost”. Some people think poltergeists are malevolent, others think they’re harmless tricksters, but one thing is certain- they’re quite powerful. Poltergeist activity is the kind that really makes you sit up and notice. It can include unexplained loud noises, such as footsteps; moving objects- items flying off shelves, doors opening and closing on their own; outbreaks of fire; objects disappearing and reappearing, floods, and electrical disruptions or malfunctions. Poltergeists can also cause physical things to happen to humans, such as skin pricks and scratches. Poltergeists are generally though of as haunting a particular person, rather than a general location. Often the activity is focused around an individual, usually a young person, such as a pre-pubescent child or teenager.
Residual Hauntings:  A residual haunting is the psychic imprint of a scene or situation, which is repeatedly played out; the witness of this type of phenomena is essentially peering into the past. It’s widely considered that these hauntings involve spirits that are generally unaware of any changes of time, date, dimension or surroundings.

Shadow People: A supernatural entity that appears as a solid black shape, often in human form but sometimes much larger.  Most who’ve encountered a shadow person say that they seem to emanate pure evil. There have been many reports of dark, shadowy figures-often wearing large hats- lurking in the corners of rooms and filling the viewer with dread and outright fear.

Outdoors, shadow people seem to dart behind trees or peak around the side of buildings or structures. Shadow animals are spotted frequently too, moving in the peripheral vision of the people who see them.

Other Types Of Paranormal Activity

Auditory Encounters
These encounters cover a wide range of possibilities, including footsteps, doors slamming, whispers, moaning, tapping, clanging - you name it! It is often thanks to these sounds that our clients begin to accept the fact that something inexplicable is going on.  These auditory encounters could be attributed to poltergeists, but can manifest from other types of spirits as well.  Even if you’re not a ghost hunter per se, any recording device     (even a voice-memo on a smart phone) will help you validate your findings when dealing with an auditory encounter.

Scents
Sometimes, the only clue that something paranormal is underway comes from our sense of smell. Of course, getting a whiff of something other worldly may only be a small portion of an overall encounter- but many people- even skeptics- have smelled certain “phantom” fragrances, such as exotic perfumes or their late grandfather’s particular blend of pipe tobacco. These manifestations are often confined to a small area and do not seem to be coming from a specific source. Some people encounter whiffs of flowers while others meet up with horrific stenches like sulfur, decaying flesh and other vile odors.
Before you think   your dearly departed Aunt Emma has come back to visit, look for natural causes such as sources of ventilation, air fresheners, septic tank problems, rotten food or an open trash bin before jumping to conclusions.

Tastes
While not as commonly reported as the other types of spirit manifestation, there have been instances of inexplicable tastes, ranging from - once again - pleasing to gross. These tastes may or may not be accompanied by actual solid materials that somehow wind up or manifest in the mouth - often after periods of sleep or rest. One sensitive we know says he tastes aluminum in his mouth when spirits are nearby.

Physical Sensations
There are many physical sensations that can occur when a ghost or a spirit is around. Probably the most commonly reported are the “cold spots” that occur in a room-or even outdoors- when the temperature drops dramatically, as opposed to gradually…with no logical explanation. Many people get goose bumps, shivers down their spine, or feel the sensation that all the hair on their body- head arms and legs-is standing on end. Headaches, nausea, or the feeling that your energy is suddenly draining are common signs too. We’ve been on investigations where we-or someone accompanying us- has actually been touched and even pushed.

No matter what paranormal occurrence you see or experience, have faith in your own intuition.  We often ignore or mistrust our gut instincts, and try to explain away odd or  “weird” situations, refusing to believe that they could actually happen. Another thing to remember is that not all spirits are malevolent; many are actually benevolent, others even have a quirky sense of humor… just like we humans.  Use your judgment, same as you would for a living person.  And don’t be afraid to talk about your experiences- there are tons of other believers around and plenty of paranormal chat forums on the internet where you can share your experiences and people will take you seriously…giving yet another meaning to the phrase “we are not alone”!

#
Had a ghostly encounter?  Leave a comment here or please email us- we'd sooo LOVE to hear about it!  divinationnation@yahoo.com

To find out more about Pleasant click here: http://www.pleasantgehman.com/


LEARN TO CONDUCT PARANORMAL INVESTIGATIONS.... AND COME ON A GHOST HUNT WITH US! 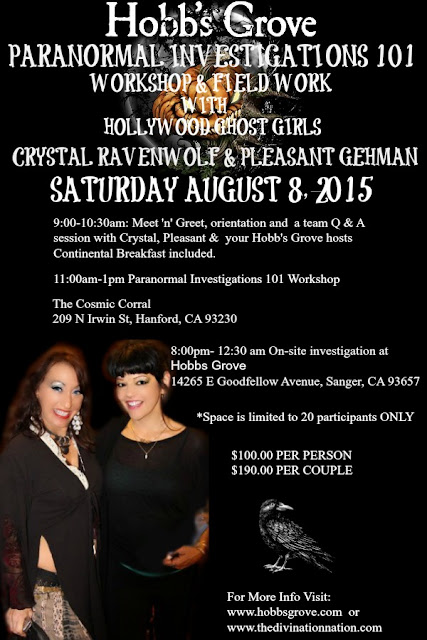